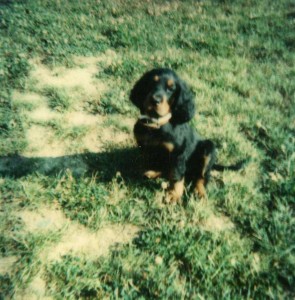 My love affair with Gordon Setters began in July of 1980 when I acquired a Gordon setter puppy from Kay Clark. Licorice was a beautiful, outgoing puppy that always got a lot of attention no matter where we went. She became my constant companion and went with me everywhere I could possibly bring her. That winter, Kay asked me to come to the 1981 Combined Setter Specialty to watch Licorice’s sister in the puppy classes. That was my first taste of dog shows, and honestly, it was all a little strange to me. Little did I know how dog shows would soon change my life. 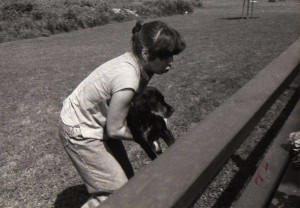 Having two youngsters, only 10 months apart, started me thinking that obedience classes would be a good thing. I enrolled both girls in classes sponsored by a local all-breed kennel club. The woman organizing the classes was an Irish setter breeder named Peg Hetherington. Peg thought both pups were good looking and had great attitudes, and encouraged me to enroll in the club’s breed handling classes. Seeing that both pups were NOT the stars of their obedience classes, I decided to give the handling classes a try. The girls did much better and I could feel myself getting hooked. 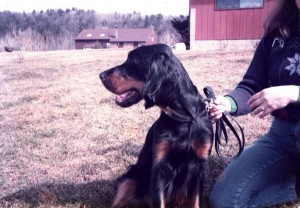 Now, I had to learn how to groom! I had kept the catalog from the Combined Setter Specialty and contacted Susan DeSilver of Gordon Hill to give me grooming lessons. Suzy was a wonderful, patient teacher and I started practicing what I had learned from her on my two girls. It was at one of these lessons that I met Laura Bedford (then Laura Silverstein), and a wonderful friendship began. Laura became my mentor. She introduced me to many other Gordon setter people and encouraged me to join the TarTan Gordon Setter Club. Many of the friendships began then continue today.

In May of 1983, Licorice became Ch. Gladhmorh’s Licorice. She finished with 4 majors and the following month, she went Best of Opposite at the TarTan Specialty. That year Blackberry was bred to Farmholme Spanish Gardener and my first litter was born. Blackberry had 10 puppies and I decided to keep one of the females. I named her Annie (Mountainview’s Cranberry). In September of 1984, Blackberry became Ch. Blackberry of Thistlewood. She finished going Winner’s Bitch at the Paumanauk Gordon Setter Specialty and I was completely hooked on dog shows and raising Gordons. 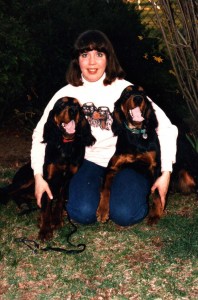 Time for some humble pie! As Annie matured, it became evident that she did NOT enjoy dog shows the way Licorice or me or Blackberry did. What she did enjoy was sleeping on my bed and the couch, and staying as close to me as she could. She spent the next 15 years being my house mouse and loving companion. I learned a valuable lesson from her. Not all dogs have to be show dogs. I also re-evaluated my breeding program and made wiser choices.

In 1985, I bred Blackberry to Ch. Halcyon Bede Dinkelacker. This breeding produced 5 bitches. I kept two of the girls – Honey and Orchid. These two girls went on to play a very important role in my breeding program – helping to establish Mountainview Gordon Setters.